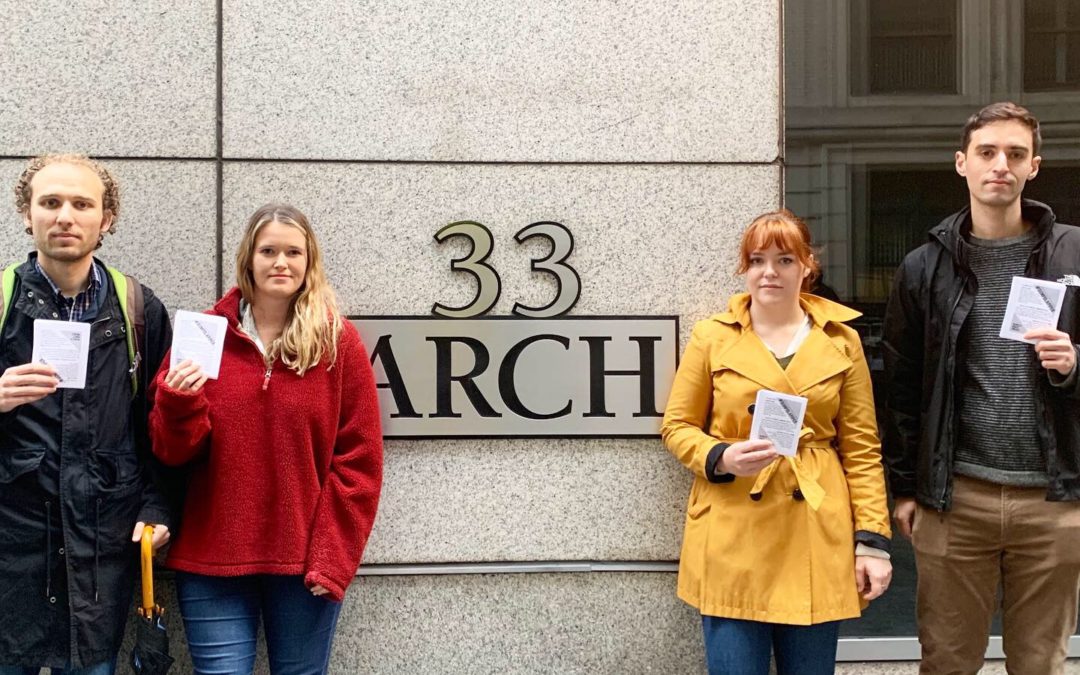 Boston, MA — On Thursday, October 10, law students in three cities took to the streets to tell DLA Piper to stop subjecting its employees to forced arbitration. The firm continues to use these coercive contract provisions to the clear detriment of its employees, including Vanina Guerrero, a partner at DLA Piper. Ms. Guerrero claims she was repeatedly sexually assaulted and retaliated against by a fellow partner. The People’s Parity Project joins Ms. Guerrero in calling on the firm to release her from the arbitration clause she was forced to sign so that she can bring her claims of sexual assault, harassment, and retaliation in a court of law.

Last spring, PPP took our fight against coercive contracts directly to law firms by distributing leaflets on the harms of forced arbitration in front of several firms that subject their employees to the practice, including DLA Piper and Venable LLP. On Thursday, students returned to DLA Piper’s offices in Boston, New York City, and Washington, DC, to stand with Vanina Guerrero and say that forced arbitration is unacceptable. PPP also published a petition on Coworker.org asking DLA Piper to release Ms. Guerrero from forced arbitration. Forced arbitration clauses, often hidden in the fine print of employment contracts, require employees to sign away their right to sue when they experience illegal conduct at work, like racial discrimination, wage theft, or—in this case—sexual harassment and assault. Employees must bring any claims in a secretive, private arbitration process that is stacked against them. These provisions are often accompanied by nondisclosure agreements (NDAs) that prohibit employees from speaking publicly about harassment and discrimination they experience at work.

DLA Piper has been a longtime target of the People’s Parity Project for its refusal to end its policy of forced arbitration, but the firm has stood proudly behind the practice. Ms. Guerrero’s account of the firm’s hostile environment is a powerful reminder of how important it is for workers to be able to hold corporations accountable. “We now know why firms like DLA Piper refuse to give up forced arbitration,” said Elisabeth Campbell, a 2L at New York University School of Law. “Forced arbitration enables bad actors to cover up and avoid accountability for their gross misconduct.”

Grace Bennett, a 1L at Harvard Law School, said that law students showed up because we have the power to change the legal profession for the better. “Law firms like DLA Piper have shown that they won’t change their policies without a fight. They have to be forced to, and we have to keep showing up because people like Vanina Guerrero shouldn’t have to fight for their basic rights on the job.”

This latest action aimed at DLA Piper makes it clear that the pressure to end law firms’ use of forced arbitration and NDAs will not be abating anytime soon. With recruitment just months away, law students are doubling their commitment to ensuring that no worker—whether they have a J.D. or not—is forced to choose between their civil rights and their job.