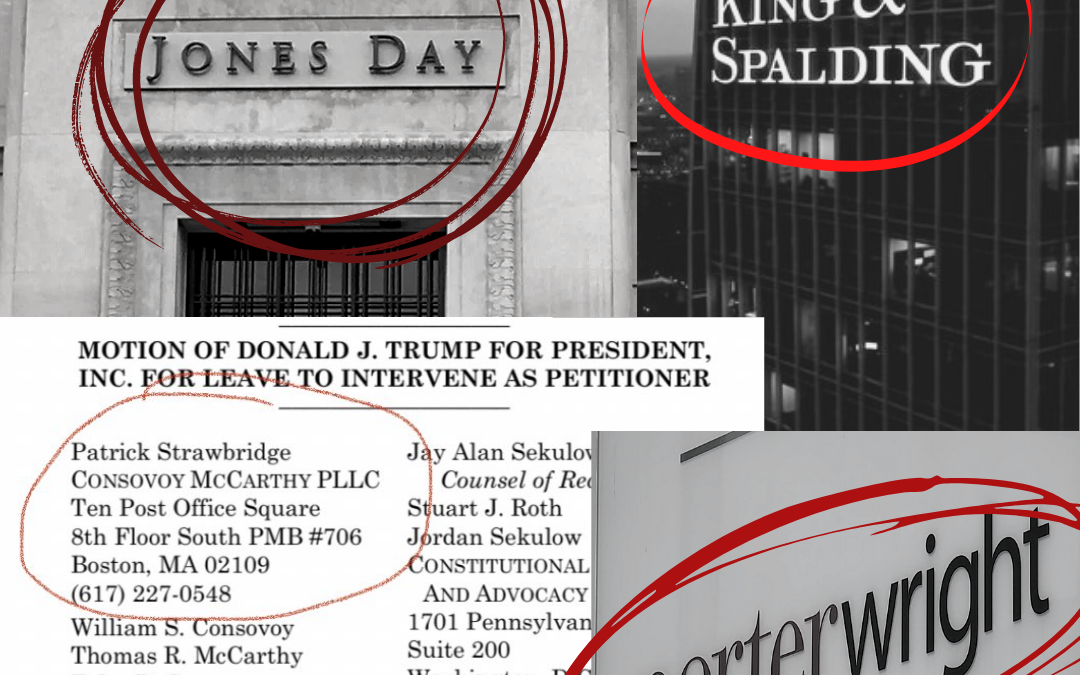 Ann Arbor, MI – Law students nationwide are pledging not to interview or work for law firms that are representing the Trump campaign and GOP allies in undermining the results of the 2020 election. A pledge letter launched by students at the University of Michigan Law School on Thursday morning targets four of the Trump campaign’s closest legal backers, demanding they stop attacking our democratic process. Over 150 law students have signed since then and the number is growing.

The pledge letter from law students refusing to work for firms representing the Trump campaign is available here.

“As law students, we dictate the future of our profession – and, in many ways, the future of our democracy,” said Brooke Simone, a second-year Michigan law student. “It is our responsibility to protect the fundamental right to vote from meritless right-wing attacks and restore the legal field.”

These attacks are coming in large part from Jones Day, which has raked in over $20 million from twenty lawsuits on behalf of President Trump, his campaign, and the Republican Party. Students who signed the pledge also agree not to work for the following firms that have filed suit on behalf of the Trump campaign: Porter Wright Morris & Arthur, which brought multiple lawsuits in Pennsylvania alleging voter fraud; King & Spalding, which led charges in North Carolina attempting to block mail-in ballot rules; and Consovoy McCarthy, which recently moved to intervene in the U.S. Supreme Court case regarding Pennsylvania election integrity.

Anne Tewksbury, a second-year student at NYU Law, added: “It’s clear to everyone, including Jones Day’s own attorneys, that the Trump Administration is bringing frivolous lawsuits for the purpose of eroding public confidence in our results and undermining our electoral system. No one should be able to work at these firms in good conscience.”

As part of its campaign, students are appealing to principles of integrity – and it’s working. Law students are standing up to hold these law firms accountable and refusing to normalize their actions destabilizing our democracy.

“Together, we can send a clear message that what these firms are doing is unacceptable and unethical. This is an abuse of the legal profession, and there will be consequences,” said Amanda Epstein, a third-year student at Harvard Law School.

The students leading the campaign are members of the People’s Parity Project, a nationwide network of law students and attorneys dedicated to unrigging the legal system and building a justice system that values people over profits.