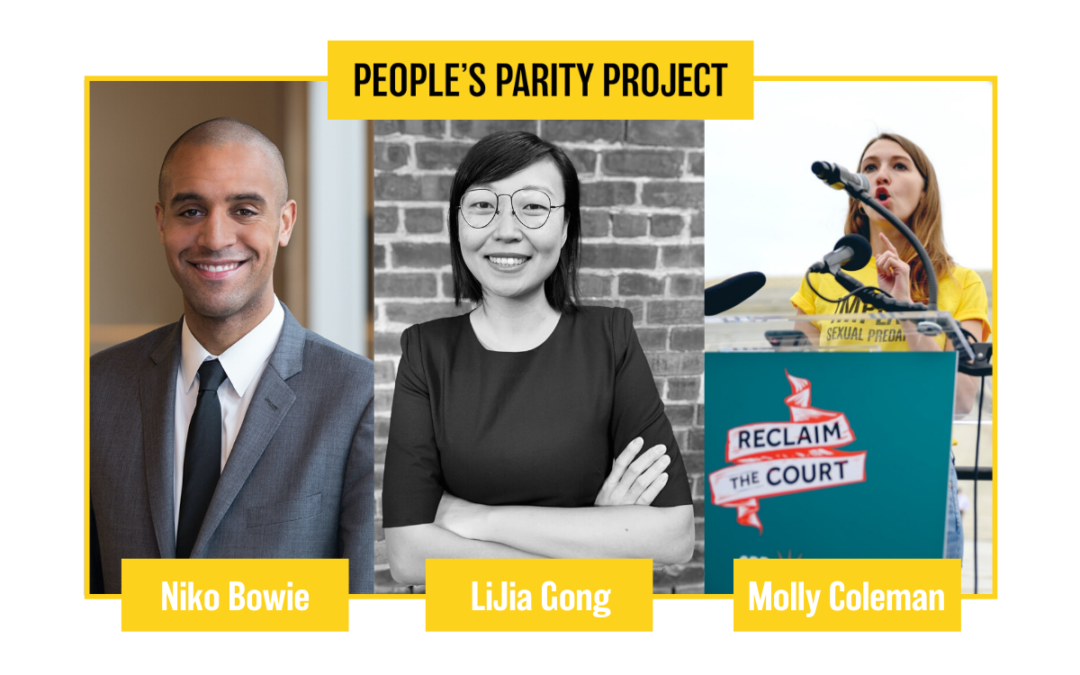 The People’s Parity Project Board of Directors announced today the selection of Niko Bowie and LiJia Gong as Board members effective June 30, and the hiring of Molly Coleman as the organization’s first Executive Director, effective July 1.

“After a year as a fully national organization, the People’s Parity Project is taking our next steps by growing our Board to include new perspectives and experiences. I know that Niko and LiJia will both bring valuable experiences from their legal and academic careers, prior non-profit service, and their own advocacy. We are thrilled to have them on our team,” said co-founder and Board Chair, Emma Janger.

Niko Bowie is an assistant professor of law at Harvard Law School, where he teaches and writes about federal and state constitutional law and local government law. In addition to maintaining a practice litigating criminal and civil appeals, he sits on the city of Cambridge’s planning board, as well as on the board of Lawyers for Civil Rights and MassVOTE.

LiJia Gong is counsel at the Public Rights Project, where she supports state and local governments in protecting and advocating for civil rights, economic justice, and environmental protection. Prior to joining Public Rights Project, she worked on Senator Warren’s 2018 reelection campaign and litigated at Frankfurt Kurnit, Klein & Selz and Davis Polk & Wardwell. She sits on the board of the Alliance for Youth Organizing and is a founding member of Radfund, a giving circle based in New York.

“With today’s announcement of our first full-time Executive Director, I look forward to the People’s Parity Project continuing to grow and to advocate for a legal system that works for all,” said Janger. “I could not imagine a better Executive Director than Molly Coleman. I know that she will bring her passion, drive, and expertise in everything PPP to her work over the coming years. On behalf of the entire Board, we are so excited to take this next step together and to work with Molly in her new role.”

Molly Coleman is one of the co-founders of the People’s Parity Project, and has served on the Board of Directors and as the organization’s National Organizing Director since 2018. She is a 2020 graduate of Harvard Law School, where she served as Editor-in-Chief of the Civil Rights-Civil Liberties Law Review. Prior to law school, Coleman spent three years working with City Year New York.

Founded in 2018, the People’s Parity Project is a nationwide network of law students and new attorneys organizing to unrig the legal system and build a justice system that values people over profits. The organization is grounded in the belief that members of the legal profession have a responsibility to demystify—and dismantle—the coercive legal tools that have stacked the system against the people. PPP is fighting for a civil legal system that works for working people, especially workers of color, women, and low-wage, precarious, immigrant, disabled, and LGBTQ+ workers.