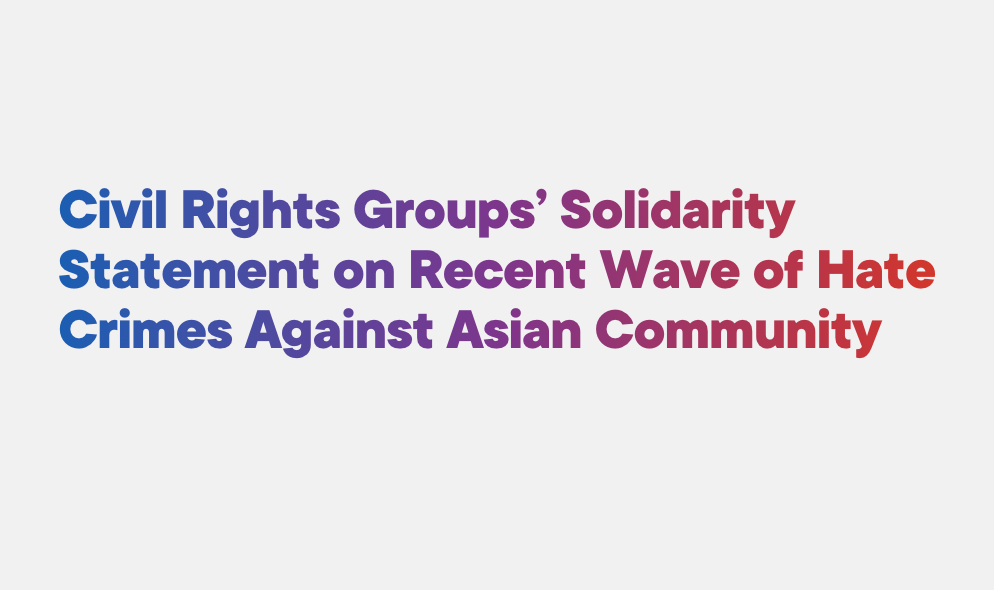 In the aftermath of last week’s massacre in Atlanta where eight people were murdered, including six women of Asian descent, the People’s Parity Project and over 200 other civil and human rights organizations came together to issue the following statement on anti-Asian and white supremacist violence:

White supremacist violence against communities of color continues to escalate, especially in recent years. The deadly shootings in the Atlanta area on March 16 follow an alarming 150% increase in violence and harassment against Asians and Asian Americans, with women reporting incidents at twice the rate as men, since the beginning of the COVID-19 pandemic. It is no coincidence that the horrific attack targeted women of color working low-wage jobs, as women of color are the most likely to suffer the consequences of racism, misogyny, and white supremacy.

The civil and human rights community condemns these misogynistic and racist attacks and is united with our local allies in demanding community-centered responses to better support Asian women and elders, who have been disproportionately impacted by the increase in violence. These responses must include increased culturally informed support for survivors and the broader community; meaningful physical and mental health care access, including for all immigrants; and economic assistance that focuses on those who need it most.

Our leaders must take steps to acknowledge and address the impact of hateful rhetoric, violence, and vitriol that have been directed at Asian Americans, especially over the past year. They must ensure that Asian American communities, including local organizations, have the resources to effectively support people targeted for hate. When political leaders who seek to deepen divisions and their enablers dehumanize communities of color and sow hatred through rhetoric and policy, they embolden white supremacists to commit horrific violence. This is unacceptable. We must all unite to demand accountability. Hate has no place in our country, and we cannot allow this bigotry to continue unaddressed.

We also joined the National Asian Pacific American Women’s Forum in signing a letter calling on the Biden administration to “to immediately commit $100 million towards addressing anti-Asian hate through community-based solutions that center the experiences and demands of Asian American and Pacific Islander organizations that work directly with, advocate for, and organize community members who are most vulnerable to being targeted by hate, bias and violence right now,” including “creating alternatives to law enforcement including violence prevention, crisis intervention and transformative justice programs that are culturally and linguistically accessible and that focus on vulnerable members of our communities.”