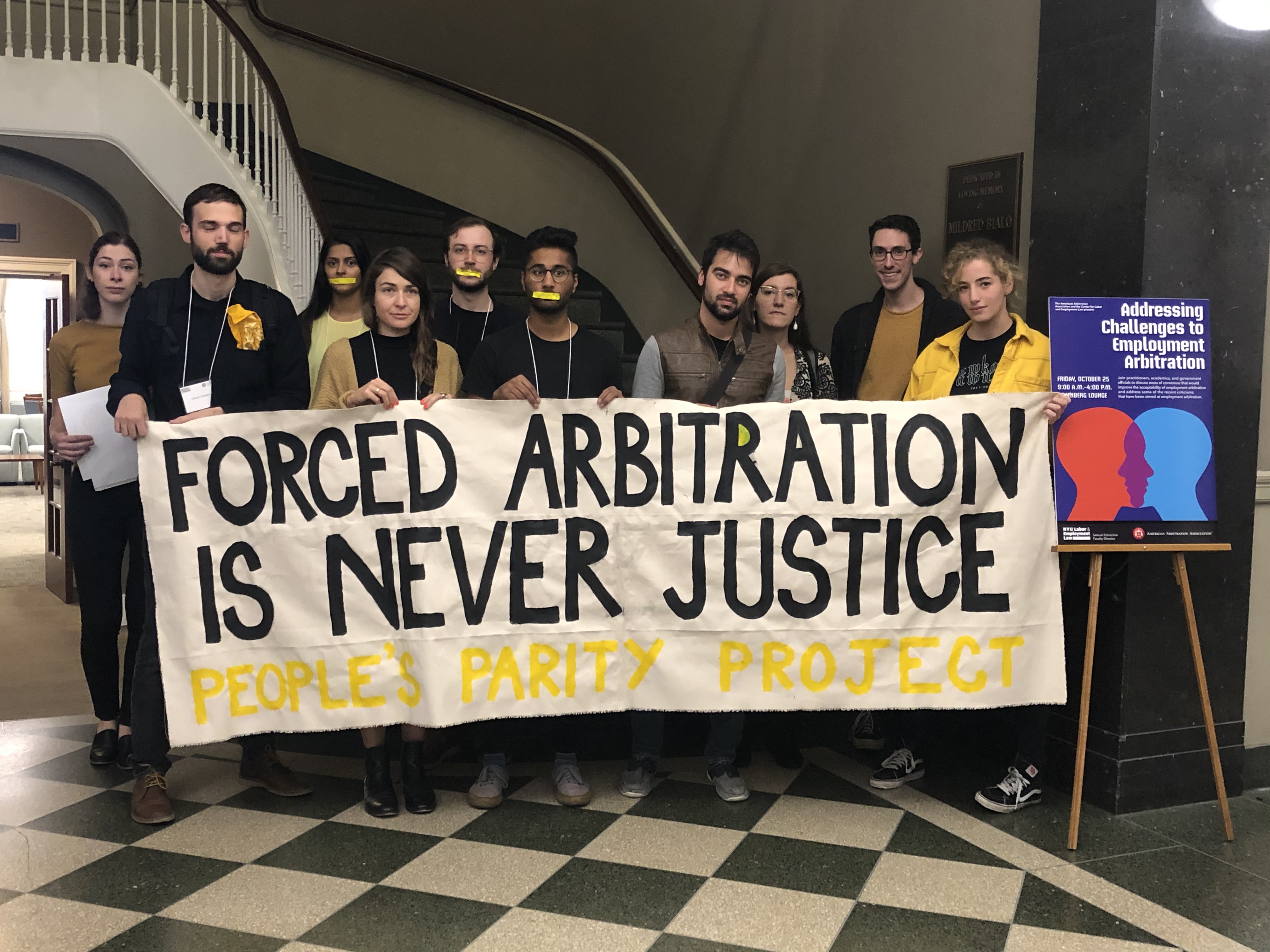 Law students at NYU School of Law met conference attendees with taped mouths and banners as PPP organizers continue to push for an end to all pre-dispute, binding arbitration.

Student organizers held banners, distributed handouts, and covered their mouths with tape to represent the way forced arbitration silences workers and consumers.  Numerous campus organizations joined the action, including the NYU Law Women, OUTLaw (NYU’s LGBTQ affinity group), the NYU Asian-Pacific Law Students Association, the NYU Middle Eastern Law Students Association, NYU’s chapter of the American Constitution Society, and more.  Organizers noted the importance of this cross-campus coalition. “Forced arbitration causes the most harm to those who are already vulnerable in the workplace: women, people of color, LGBTQ+ workers, workers with disabilities, and low-income workers. We as law students stand unified in our opposition to this practice which increases power for the powerful, and further marginalizes the most marginalized,” said PPP organizer and NYU 1L Mac McMechan.

Students also explicitly tied their organizing efforts to the #MeToo movement.  1L organizer Nina Henry emphasized the way in which forced arbitration was a key ingredient to creating workplace cultures in which harassers thrived: “Forced arbitration makes it even harder than it already is to hold sexual harassers in the workplace accountable.  As future lawyers, we oppose a system in which corporations can keep their employees permanently locked out of the justice system. Workers deserve better.”

Students expressed their hope that attendees of the conference would recognize that a commitment to reforming the employment arbitration system has to begin with an end to forcing workers to sign away their right to go in front of a judge and jury as a condition of employment.  “At this point, the facts are clear,” said Vishal Reddy, a 2L organizer with PPP. “You are more likely to be struck by lightning than to win in forced arbitration. Anybody who thinks that tinkering around the edges of this system is enough to ensure justice for the millions of Americans who have signed away their rights is willfully ignoring the extent to which forced arbitration is rigged against workers.”

One student, 2L James DeBoer, sat in the audience during the beginning of the conference with his mouth taped.  Afterwards, he said, “I chose to tape my mouth as a symbol of how arbitration silences workers. Many claims forced out of court end up never even being filed in arbitration, essentially silencing these workers and their stories.”

Forced arbitration effectively operates as a secretive, privatized justice system that is stacked in favor of big corporations. The Economic Policy Institute estimates that workers subject to mandatory arbitration win just 38 percent as often as they would in state court and 59 percent as often as they would in federal court. Even when workers do win, they only get a fraction of the damages. Consumers subject to forced arbitration fare just as poorly. Public Citizen found that consumers only won in 6 percent of arbitrations against financial institutions in California.

Arbitration’s opacity and lack of procedural safeguards undoubtedly benefit companies who are repeat players in the arbitration world. Arbitrators who are selected by corporations to rule in forced arbitration proceedings face an untenable conflict of interest between keeping their customers happy and issuing unbiased rulings.

The threat is growing: As of 2017, more than 60 million American workers have signed forced arbitration agreements in their employment contracts, and 81 of the largest 100 US companies have forced arbitration clauses in contracts with their customers for financial products, cell phones, and more. The game was always rigged against working people—now, they might not get to play at all.

PPP organizer Anne Tewksbury, a 1L at NYU, explained why this issue is so important to law students.  “We came to NYU to fight for justice for working people, only to find out that corporations have found a way to keep workers out of the justice system entirely.  Our job as future lawyers is to ensure that the system works for people, not corporations — ending forced arbitration is the first step to achieving that goal.”