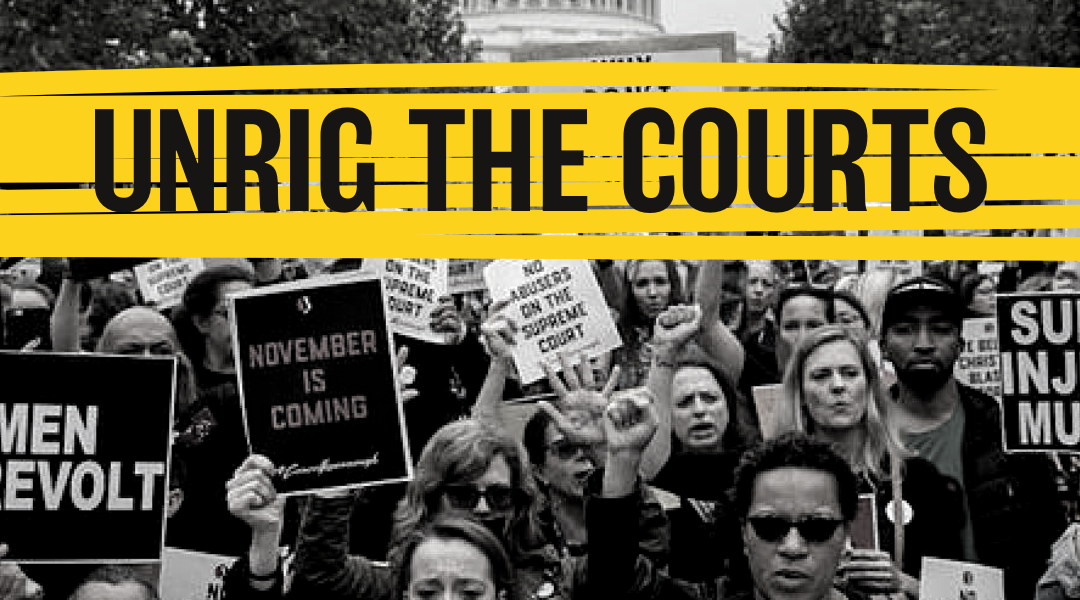 As the Senate begins the process to confirm Judge Ketanji Brown Jackson to the Supreme Court, progressive court reform leaders of the Unrig the Courts coalition are calling on every member of the Congressional Progressive Caucus to cosponsor and help to advance the Judiciary Act, a bill to add four seats to the Supreme Court and rebalance the bench’s ideological spectrum.

In addition to PPP, signers of the open letter include Stand Up America, the Center for Popular Democracy Action, Demand Justice, Demos Action, Indivisible, and Take Back The Court.

For the last thirty years, the Congressional Progressive Caucus (hereafter referred to as ‘CPC’) has championed solutions to urgent crises facing our nation. In 2020, the American people placed their trust in progressive Democrats to meaningfully address big-ticket issues, from protecting voting rights to upholding long-guaranteed reproductive rights to keeping our families safe from gun violence. The CPC’s recent endorsement of the Judiciary Act showed that caucus members are ready to do what it takes to protect our constitutional rights from the Supreme Court’s conservative supermajority.

That’s why the undersigned organizations write to strongly urge all members of the CPC to cosponsor the Judiciary Act of 2021 (H.R. 2584), which would add four seats to the Supreme Court and restore balance to our nation’s highest court to protect our most sacred rights from the right-wing supermajority appointed to the bench by Donald Trump. Of course, we also write to thank the many members of the CPC who have already signed on to this crucial legislation.

By rebalancing the court, the Judiciary Act of 2021 would protect our constitutional rights and liberties and reverse the partisan takeover of the Court spearheaded by Sen. Minority Leader Mitch McConnell, Donald Trump, and other right-wing politicians. As the members of the CPC undoubtedly know, the radical right shoehorned the confirmations of Justices Neil Gorsuch, Brett Kavanaugh, and Amy Coney Barrett through the Senate against the will of the American public. Sadly, the Supreme Court is no longer a fair body of judicial review. As the Court’s recent actions have repeatedly shown—from reproductive rights to immigration to voting rights—the Supreme Court is now an all-too-powerful arm of the Republican Party.

The conservative supermajority’s relentless pursuit of a far-right political agenda threatens our rights, our lives, and the sanctity of our Constitution, as the Court has agreed to hear challenges to long-standing precedents on reproductive rights, common-sense gun laws, racial gerrymandering, and the environment. The Court’s conservatives are making no attempt to conceal their agenda: To roll back our constitutional rights and reverse decades of progress. The consequences of these radical decisions are already falling most heavily on Black and brown people. It’s no surprise, then, that the American people have lost faith in the Supreme Court—a September poll found that public confidence in the Court is at an all-time low, with just 37% of Americans approving of the Court. At the same time, some polls already show a majority of Americans support court expansion, including 75% of Democrats.

With 47 cosponsors in the House and three in the Senate as of today, it is imperative that every member of the CPC work to swiftly advance this legislation to President Biden’s desk. For years, CPC members have been among the fiercest defenders and champions of the rights of people of color in our country. Now is the time for the CPC to lend broad and vocal support for the Judiciary Act to restore balance to the Supreme Court and to ensure that it can fulfill its sacred responsibility to deliver equal justice under the law to all Americans. At least 47 members of the CPC have already signed on. It’s time for all CPC members to co-sponsor the Judiciary Act of 2021 and secure our most sacred constitutional rights.

Thank you for the work you do every day to advance progressive policies for all Americans.