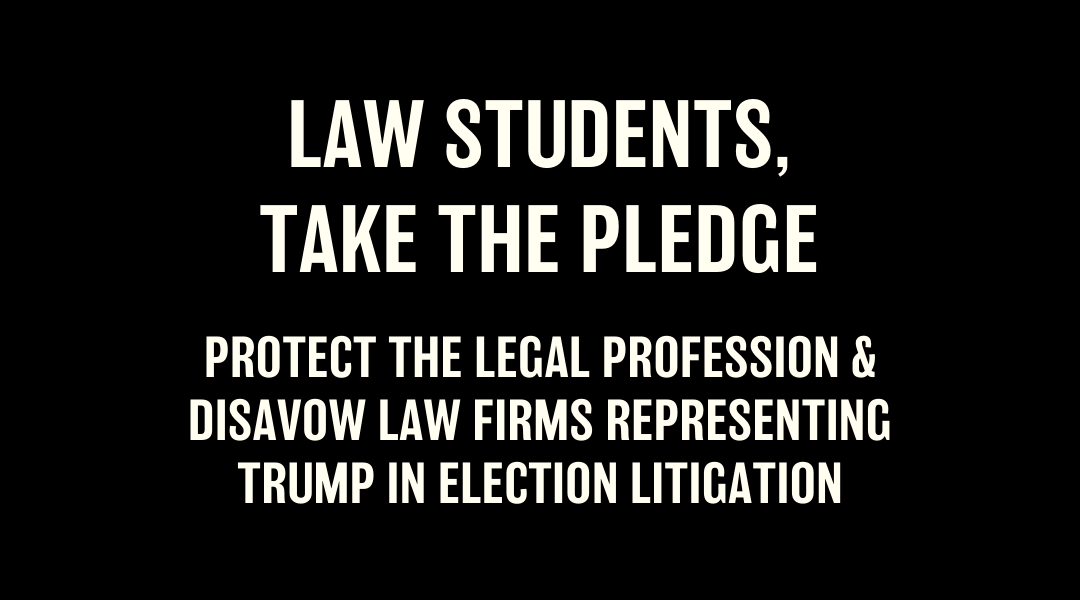 Law students everywhere are invited to take our pledge not to interview or work for the law firms doing the majority of the legal work for the Trump campaign’s despotic attempts to threaten our election integrity and the future of our nation.

Read more about why we chose these four firms—Jones Day, Porter Wright, King & Spalding, and Consovoy McCarthy—who have received the largest share of attorney’s fees from Trump’s campaign and the majority of the legal work.

Our democracy is under attack. President Trump’s reelection campaign and the Republican National Committee have filed frivolous lawsuits in states across the country in an attempt to overturn the results of a fair election and undermine our democratic process. These lawsuits are failing and have received vehement criticism for their meritless attempts to sow discord and distrust.

Yet, attorneys from Jones Day, Porter Wright, King & Spalding, and Consovoy McCarthy are leading the charge. They are not just complicit – they are enabling despotic attempts to threaten our election integrity and the future of our nation. This is unethical, plain and simple.

Today, law students nationwide are joining together to send a message: We will not interview or work for these law firms.

These four firms are being credited as receiving the largest amount of attorney’s fees from Trump’s campaign and the majority of the legal work:

Law students, particularly 1Ls and 2Ls participating in the law firm recruiting process, must stand up, use our power, and refuse to normalize the actions of lawyers destabilizing our democracy. We can hold ourselves and others accountable for our decisions. We can choose what we want this profession to look like. As civil rights attorney Sasha Samberg-Champion put it, “we are a self-regulating profession, and we need to start regulating.”

We cannot let these law firms continue to delegitimize our democracy, and we certainly cannot work for them. We have a moral imperative.

As law students, we pledge not to participate in the recruiting processes of Jones Day, Porter Wright, King & Spalding, and Consovoy McCarthy for as long as they continue to help undermine our democracy.

Learn more about the other ways we’re holding the Trump administration accountable.

Other firms that have worked for the Trump reelection campaign in election-related litigation include Baker Botts, Statecraft PLLC, Snell & Wilmer (which has withdrawn its case in Maricopa County), True North Law LLC, and Taylor English Duma LLP.